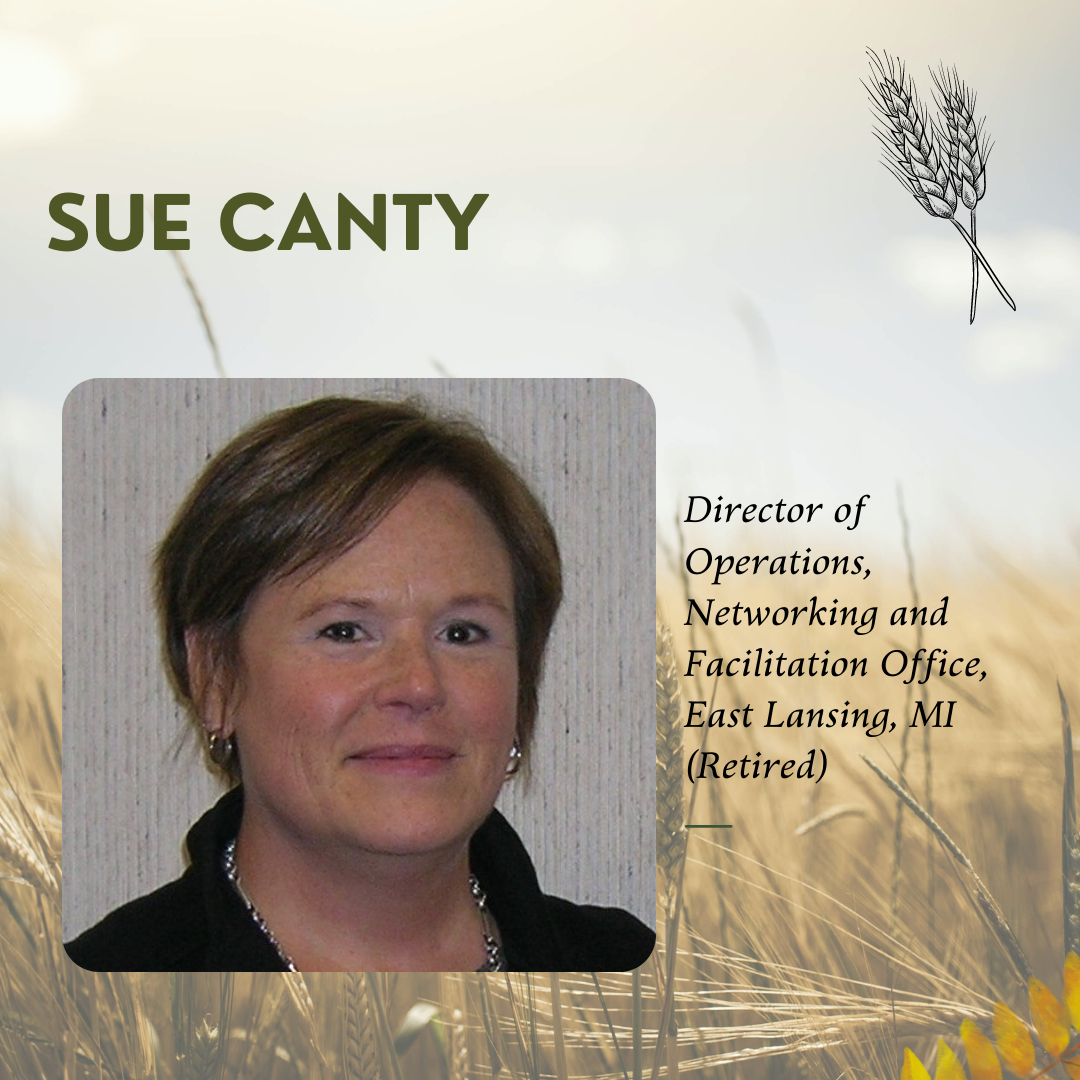 Congratulations to Sue Canty, recently retired Director of Operations of the Networking and Facilitation Office for the U.S. Wheat and Barley Scab Initiative, in Lansing, Michigan. Sue worked for the USWBSI for 22 years. During her time with the Initiative, she has worked to process and submit funding applications that resulted in over 1,600 agreements between USWBSI PI’s and the USDA-ARS totaling $128,806,687 in awards.

Sue grew up in Michigan and attended Michigan State University. She graduated with a B.A. degree in Family and Child Ecology. While her degree is not related to agriculture, the love of plants is firmly rooted in her history. Her maternal grandmother’s family emigrated from Norway and settled in New Era (Western Michigan) because it reminded them of their homeland. Later, her maternal grandfather sold the farmstead, where her mother was born, and moved the family to East Lansing and started working as an extension specialist for Michigan State University. When he retired from MSU, her grandparents moved to Melrose, FL and purchased a blueberry farm, which they operated for over 30 years. To this day, no blueberries have out-competed the flavor of her grandfather’s. She traces her ‘green thumb’ and love of plants to her family history, which included a large home garden, raspberries and fruit trees.

Inspired by Care and Civic Values

Sue lost both of her parents within a two-year span when she was in her twenties, but they continue to have a positive impact on her life and who she is as a person. From an early age, Sue’s mother instilled the importance of participating in American democracy and being there for others in our communities. Her mother was a middle-school teacher in Flint, Michigan’s public schools and was devoted to this role until she was no longer able to work due to illness. Sue is inspired by her mother’s civic mindedness; to protect humanity and the environment, and to serve the greater good.

When Sue was given the opportunity to apply for the Manager of the Networking and Facilitation Office (NFO), she was at a crossroads in her life. She had recently returned to the U.S. after having lived in Madagascar for 14 months. Although she was not officially involved in the USAID project that brought her and her then husband to Madagascar, she did help train the Malagasy secretarial staff who were working for the project.  Once she was back in the U.S., she spent several years working different temporary jobs (both administrative and research-related) at Michigan State University. She was finally hired back into her home department, Crop and Soil Sciences, as a research assistant with the corn breeding program. This was an exciting opportunity for her to try something different, and she was able to see many parts of Michigan she probably would not have seen otherwise. However, Sue wanted to seek opportunities that challenged her in other ways. At the time, Dr. Rick Ward was the Co-Chair of the USWBSI and the founder of the Networking and Facilitation Office. Sue had previously worked with Dr. Ward when she was the Graduate Student Secretary for the Department. She was asked to interview for the position in the NFO, and, as they say, “the rest is history.”

While in her position at the NFO, Sue worked tirelessly to aid the USWBSI in meeting its mission. She organized all the USWBSI administrative and governance meetings, planned and staffed the Forum, handled the call for pre-proposals and worked with the USDA-ARS staff to ensure the efficient processing of all the USWBSI funding awards, and handled dozens of other NFO tasks in support of the Initiative. This work often burdened her with a heavy workload that saw her working long days. Sue found working with all the people involved in the USWBSI to be the best part of her job. These people include the PIs, the stakeholders, the committee members, USDA-ARS’ administrative staff, secondary scientists, research staff, graduate students, sponsored programs office personnel, the NFO staff and of course the Co-Chairs. On her retirement, Sue said “The Scab Community is such a wonderful group of people and I have truly enjoyed all the people I have met, and the relationships I have developed over the past 22 years. This is, by far, what I will miss the most.”

What the Future Holds

While Sue’s journey with the Initiative has ended, a new chapter of her life is just beginning: making the most of her retirement. Sue is retiring earlier than anticipated due to health issues, but she still plans to have adventures and try to live true to her humanitarian and environmental values.

When COVID allows, she hopes to travel with her newfound time and is even thinking about relocating outside of the U.S. Inspired by her mother, Sue also plans to spend time being involved in civic causes. She plans to participate in politics, seek ways to stand up for equality, and care for the environment. In the immediate future, she plans to work on her house and gardens, and spend time with friends.

We thank Sue Canty for her amazing dedication to all the USWBSI PIs she has aided over the past 22 years and wish her well in her retirement.

You can also check out the series of previous USWBSI Featured Researcher's.