Mission Statement:  To enhance food safety and supply by reducing the impact of Fusarium Head Blight (scab) on wheat and barley.

Fusarium Head Blight emerged in the past decade as a widespread and powerful enemy of American agriculture. This disease, also known as Scab, inflicts yield and quality losses on farms in at least 18 states. Food industries throughout the U.S. incur losses from the cost of dealing with the toxin-contaminated grain that often accompanies scab infection. Combined losses to all steps in the food system are difficult to estimate, but the bill at the farm-gate alone is estimated to exceed 3.0 billion dollars since 1990.

The existing private, state, and federal research system of the U.S handles most of the newly emergent pests and diseases. But some problems, like scab of wheat and barley, presented unusual challenges that warranted new approaches to research. There are several reasons why scab fell in this category:

As a result of these special circumstances, scab of wheat and barley was one of several plant disease complexes accorded special status as "Emerging Diseases" in Federal budgets in 1995 and 1996. National awareness of the serious nature of scab was a welcome development. However, the real challenge came in the design and implementation of a national, multi-disciplinary, and multi-institutional research system that can win the war on scab as quickly and efficiently as possible.

Since 1997, federal, state, and private sector scientists have worked closely with growers, input providers, millers, and food processors from across the country to design and fund just such a system. The result of these efforts is the U.S. Wheat and Barley Scab Initiative (USWBSI). In one sense, the Initiative is a self-organized "contact group" on scab. The goal of the U.S. Wheat and Barley Scab Initiative is to develop as quickly as possible effective control measures that minimize the threat of Fusarium head blight (scab) to the producers, processors, and consumers of wheat and barley. The USWBSI is guided by a Steering Committee that includes growers, farm organizations, food processors (e.g., millers, bakers, pasta manufacturers, and brewers), scientists (from Land Grant universities, USDA, and private companies), and consumer groups. Nine members of the Steering Committee also serve on an Executive Committee. The Steering and Executive committees are advised by a series of six research committees (Table 1.) composed of recruited volunteers from the scientific leaders of the U.S. wheat and barley research communities. The composition of all committees is designed to ensure balanced input from all commodities, regions, disciplines, and institutions engaged in the battle against scab. The Initiatives Networking and Facilitation Office, based at Michigan State University, facilitates the work of these committees. That office also promotes communication among the varied parties interested in scab, and represents the Initiatives only fixed asset. 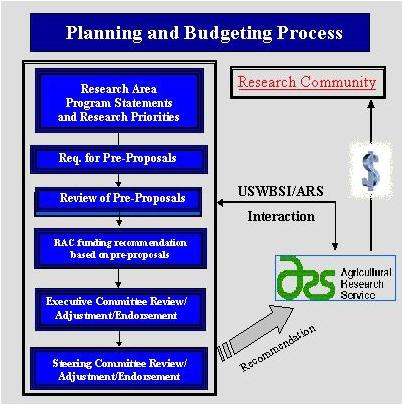 Congress appropriated funds to the USDA-ARS in each of the past four fiscal years (1998-2001) In FY01, the ARS reserved $5.04M for collaboration on Scab. The USDA also contributed funds to the Initiative recommended funding with end-of-year funds in FY97 ($200,000), and discretionary funds in FY98 ($200,000). That money is part of the ARS base budget and does not require the yearly lobbying process associated with special grants through the USDA- CREES. Increases specifically associated with scab have also been made in the base budgets of specific ARS facilities in the past four years ($1.375M). Combined, these funds represent an unprecedented commitment to wheat and barley research at the Federal level. Congress did award an additional $800,000 in FY01. However, this increase was not included in the proposed Administrative Budget for FY02.

The FY97 and FY98 funds were dispersed primarily as Cooperative Agreements through Dr. Bob Buschs offices (USDA-ARS, MN). The USWBSIs research and steering committees undertook a process in 1998 (see Fig. 1) that generated a comprehensive research plan for the funds appropriated in FY99 federal budget (October 1998 through September 1999). Every conceivable solution area was considered, and the resulting mix of research projects was truly comprehensive. The prioritization process was competitive by its very nature, since researchers had to demonstrate their ability to contribute to the overall solution. On the other hand, the final research agenda consisted of a mix of projects identified via both directed and purely competitive processes. In almost all cases, funds proposed by the Initiative were heavily leveraged by existing sources of investments in personnel, facilities, and supplies.

The resulting research plan for FY99 involved 66 principal investigators in 19 Land Grant Universities and the ARS. Collectively, 111 projects were funded for one year, most with starting dates (dates funds were available) in May or June of 1999. The details of the overall research plan were finalized at the 1998 Fusarium Head Blight Conference. Much of the work reported in the 1998 NFHB Forum proceedings was partially funded by Initiative recommended funding.

FY00 was the first year that a formal call for proposals (actually pre-proposals) was issued. Proposals totaling $5.73M were received from a total of 84 scientists affiliated with 23 Land Grant Universities, ARS and CIMMYT. $1.55M of these funding requests was for new proposals, and 19 of the applicants were new to the Initiative. For FY01, 120 proposals were received from 92 scientists totaling $6.56M. The final research plan/budget for FY00 and also FY01 is listed in Table 2.

The unprecedented nature, magnitude, and scope of this collaboration require constant innovative efforts by the administrative staffs of the Initiative, ARS, and the participating Land Grant Universities. ARS has been supremely cooperative and has exhibited degrees of flexibility and sensibility not commonly attributed to Federal agencies.

Substantial research efforts were already underway in several states before anyone had notions of a national effort. However, the articles and poster abstracts included in the past three volumes (1998, 1999 and 2000) of the National Fusarium Head Blight Forum proceedings represent a veritable explosion of scab research. The Proceedings can be accessed through the Initiatives web site. Below is a list of just a few of the accomplishments resulting from research being conducted through the Initiative:

The speed and magnitude of the success the industries and organizations involved have had in generating funds and associated research plans is an arguably unprecedented happening in U.S. plant agriculture. However, what the Initiative has really done is enabled the research community to fully engage in the real challenge, which is the elimination of scab as a destructive force in the U.S. food system. There is now a substantial solution-discovery engine up and running. There are two fundamental challenges deserving of heightened focus throughout the ensuing year. First, how do we increase the scientific productivity of the resources committed to scab research, and second, how do we minimize the time lag between discovery of a solution and its comprehensive employment in relevant at-risk systems? We believe that weve only begun to scratch the surface of the wealth of opportunities for synergistic collaboration on both of these issues. One means of addressing the first challenge (scientific productivity) is full employment of modern communication technologies, i.e., the Internet. The Internet has already played a significant role in the Initiatives history, both through email list servers, and through a central web site. However, little if any progress has been made in moving towards the kinds of virtual communities of scientists made possible by the real-time, or near real-time communication systems available through the web. The second challenge, the lab vs. real-world time lag, requires pro-active forward thinking by across-discipline alliances representing all aspects of the continuum from the lab to the field or factory. In both cases, although great progress has been made, these challenges still require continued investment and belief in research system components that transcend the individual research scientist.

Full Proposal: '97 effort - Full text of 12-state consortium proposal. Based on intense discussions during a 10-hour 'airport' meeting among scientists and administrators in March of 1997.